Proel S.p.A., a well-established international manufacturer of musical instruments, electronics and accessories, on May 13 and 14 hosted its European and North American Dexibell keyboard dealers at the company’s headquarters in the scenic municipality of Sant’Omero, Italy. The event, entitled “Keys to the Future,” was held to celebrate the ongoing success of Dexibell professional and home keyboards. It included talks by company visionaries, designers, engineers and product experts who recapped the company’s history and passion for Italian design and proudly introduced the next generation of Dexibell’s ‘’made-in-Italy” Vivo series keyboards. The highlight of the program was a memorable performance by some of Dexibell’s very notable American artists. 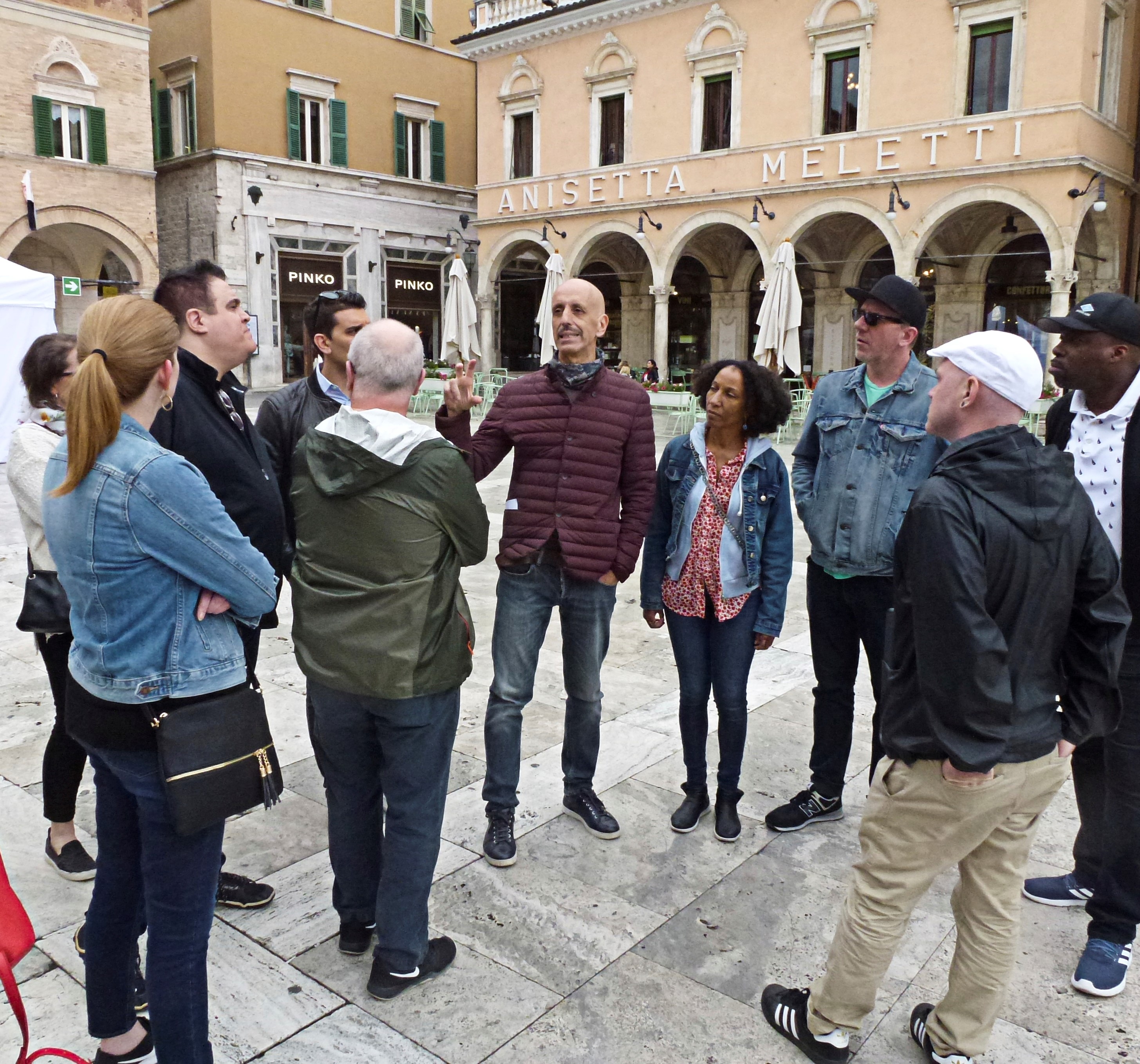 Upon arrival in Rome a day ahead of the event, North American dealers and performing artists were welcomed by Antonio Ferranti, president of Proel North America, and shuttled from the airport to an Adriatic coast hotel to simplify daily transportation to Proel facilities. The trip from the airport provided Proel’s guests an opportunity to view the countryside and hear informally about the region’s long history with musical instrument building. Historically important for its expertise with accordion innovation and production, the region has long lent its local labor and love of musical instrument building to the music industry. As modern keyboards have evolved, the area became home to legendary keyboard efforts like Farfisa and Fatar, as well as developing into a key location for Roland’s development of the E-20 synthesizer, V-Accordion and other Roland keyboard products.

“The production of keyboard instruments is historically very important to this region’s economy,” said Fulvio Pesenti, our impromptu tour guide and Proel’s marketing director. He explained that when Roland’s organization changed in 2014, leaving the region and a close-knit team of electronic keyboard designers, engineers and builders behind, keyboard innovator Luigi Bruti and Proel CEO Fabrizio Sorbi combined forces to begin designing and building the first exceptional Dexibell keyboard.

A “free day” for North American travelers before the event provided both dealers and artists with time to recover from a long flight. Proel helped by offering a group brunch and a trip to a local historic site, where the group could stretch their legs, enjoy a beautiful ancient piazza in the nearby Ascoli region, and sample local cuisine, including fried olives (a local favorite), anisette-flavored expressos and pastries. A lively wine tasting of the region’s most popular wines at Ciù Ciù winery followed by a pizza dinner hosted by Dexibell founder Luigi Bruti allowed the North American group to meet and exchange experiences with fellow dealers and artists from Europe. 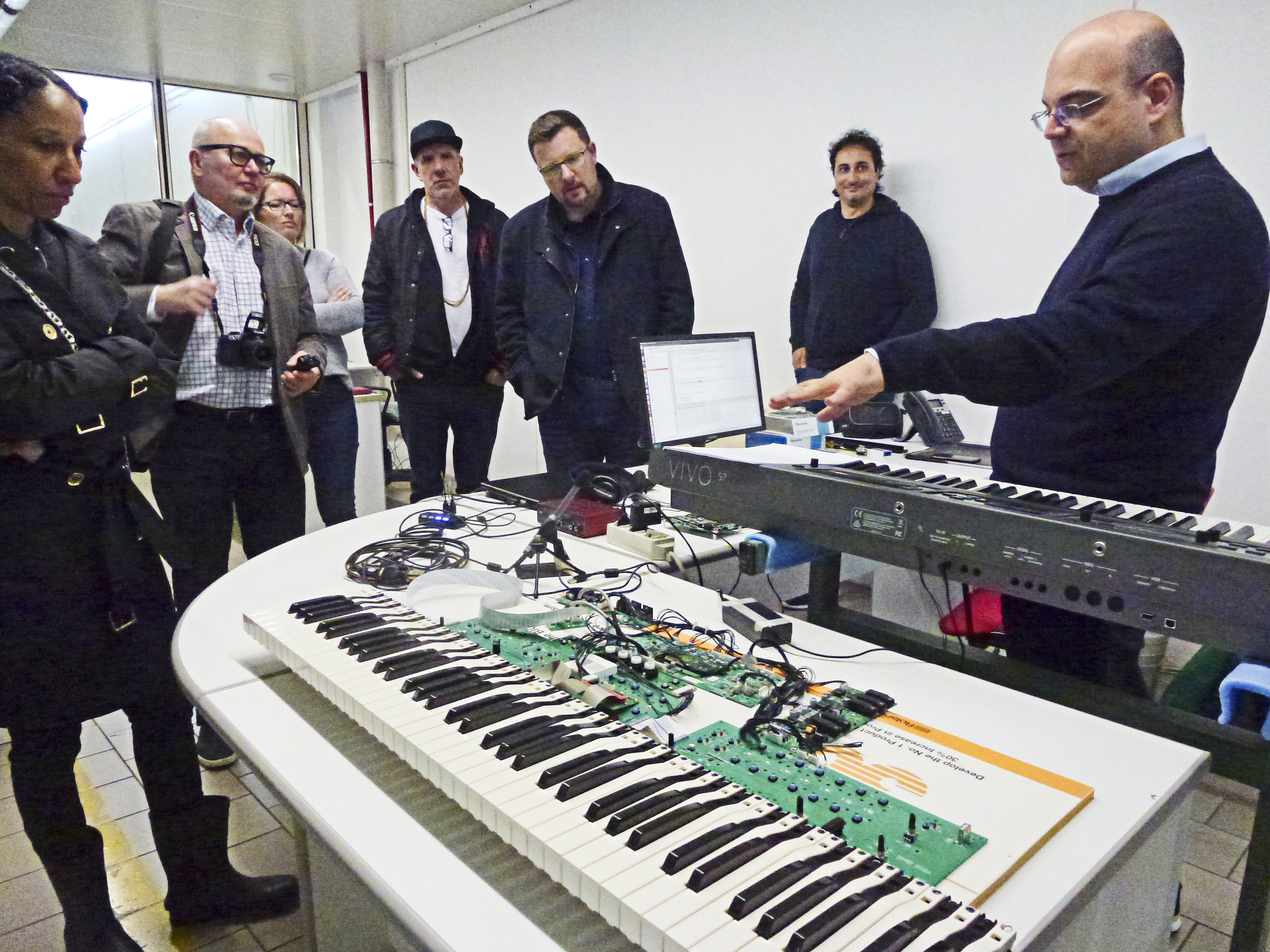 On the first day of the event, dealers were given a tour of a well-organized Proel factory facility. Space there is divided to support a Dexibell design group, where a team of 10 engineers have divided their work into sound production, keyboard internals and production areas. Moving through operating production areas, dealers were shown where incoming materials for Dexibell keyboards, like the Vivo S7 stage piano and Classico L3 organ, are checked to assure they match specifications before moving into assembly areas. The steps of assembly were explained by Alfredo Maroni, former president of Roland Europe and, now, Proel managing director, who took the group through stations where keyboards are assembled, tested and ultimately packaged for shipment around the world.

Dexibell’s development team works in close proximity to one another in an area of glass-partitioned offices just off the factory floor. Andrea Celani, a leader on Dexibell’s product development team, explained the team’s current efforts to design the internals of Dexibell keyboards to be faster, more effective and easily upgradable using opensource platforms. Before addressing questions from the dealers, Celani recalled the team’s early efforts to design the best possible keyboard from scratch, explaining that “We started with a totally white sheet of paper.” He also noted, “We are not a big team, and that facilitates our working closely together, allowing us to react quickly to overcome issues, as well as to quickly resolve any problems we may encounter.” 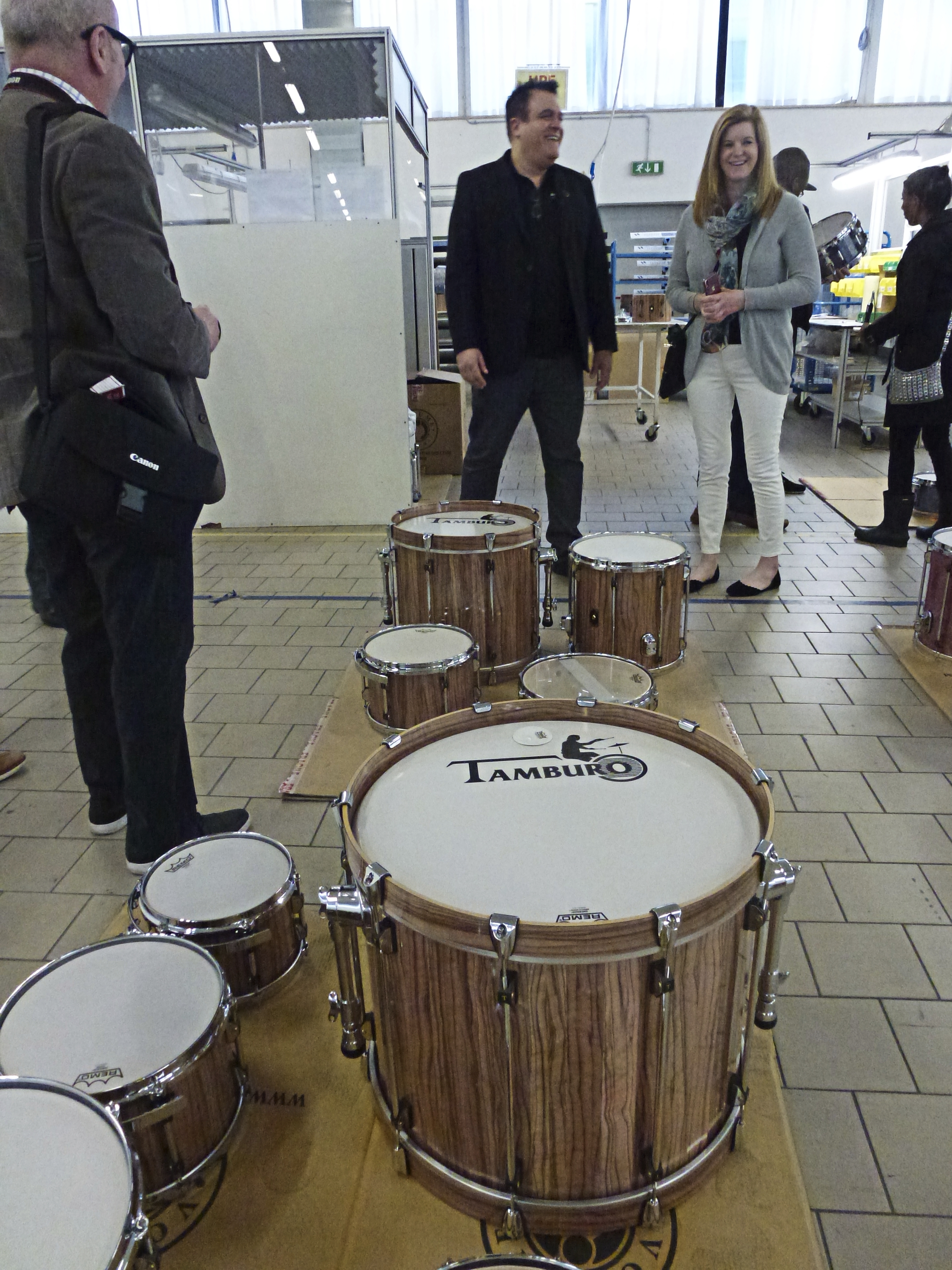 Tamburo drums are assembled and readied for shipment on the Proel factory production line.

Celani added how the team of software and sound engineers has leveraged open-source tools and common processing platforms to build keyboard products that are both quickly adaptable and upgradeable. As a result, Dexibell’s Aquaviva operating system (currently at version 4.07) allows for extraordinary features, including unlimited polyphony with ultra-realistic piano reproduction employing sound samples of 15 seconds and greater, he stated.

From the factory setting, the North American dealers were shuttled to the Proel headquarters complex less than a 30-minute drive away. Nestled in the scenic hills among farms and pastures, the modern Proel building houses company offices for marketing, finance and human resources, as well as a well-organized product showroom and the in-house Proel Theater, a performance venue that is completely “powered” by the company’s production gear. Before visiting the Proel product showroom, visitors were treated to lunch in the company’s cafeteria, which offers employees healthy, locally grown foods prepared daily on site. 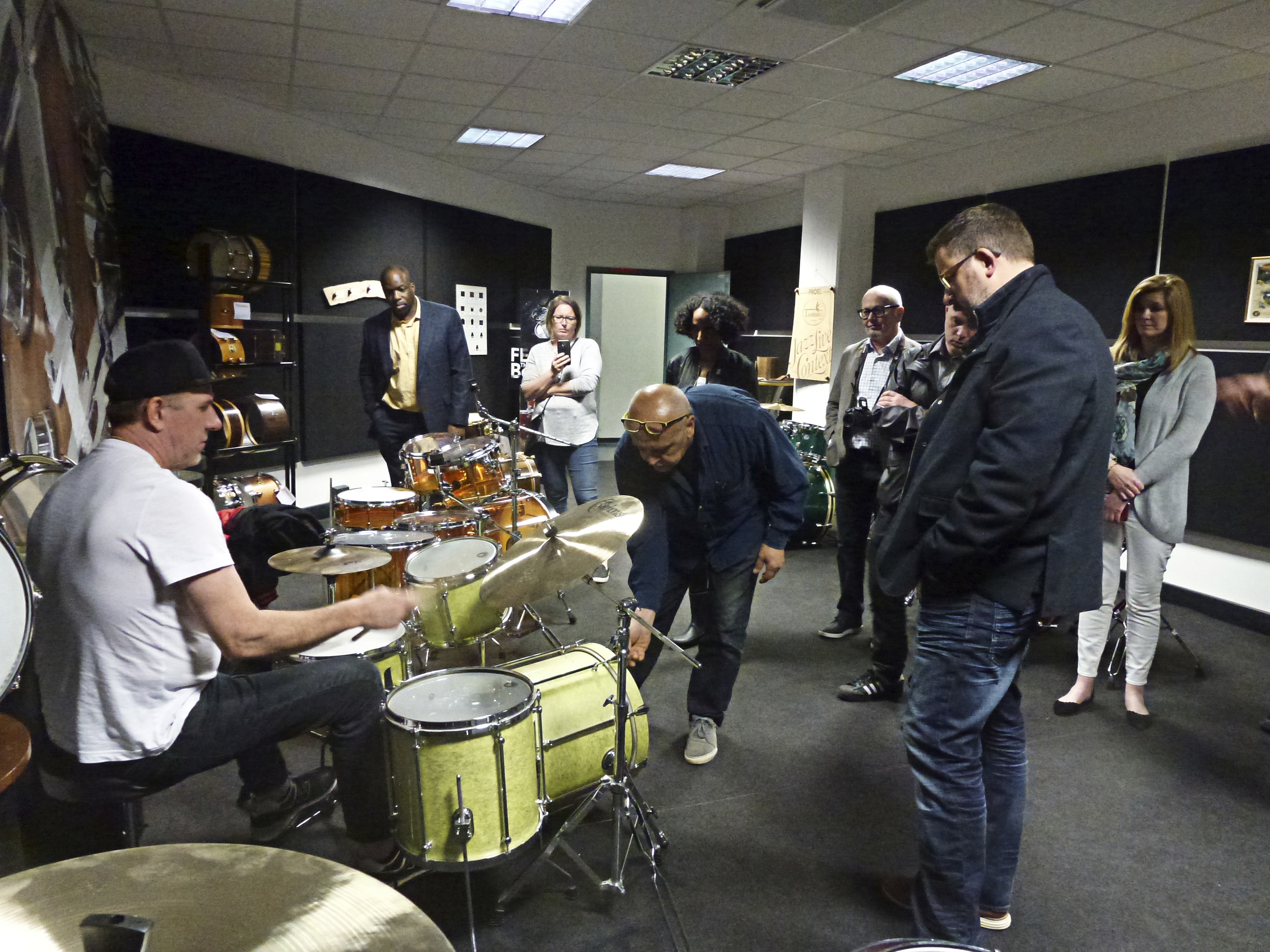 The product showroom provided an opportunity for the dealers to explore more Dexibell keyboard models, but also Proel’s other product families. In particular, dealers learned about the progress of new Eikon dynamic, wireless and studio microphone models, a line of headphones and a new studio monitor series soon to be available to North American buyers. Product expert Rocco Camerlengo provided details on all the models, making sure that, in addition to quality specifications, dealers understood how being Italian-made allowed these products to be better than their competitors. “We’ve placed these at attractive price points,” he offered, “but I can point to the circuit boards that we have carefully designed and show you that we engineered these to perform better. They are well engineered here and shouldn’t be confused with cheaper copies that others may be offering.” 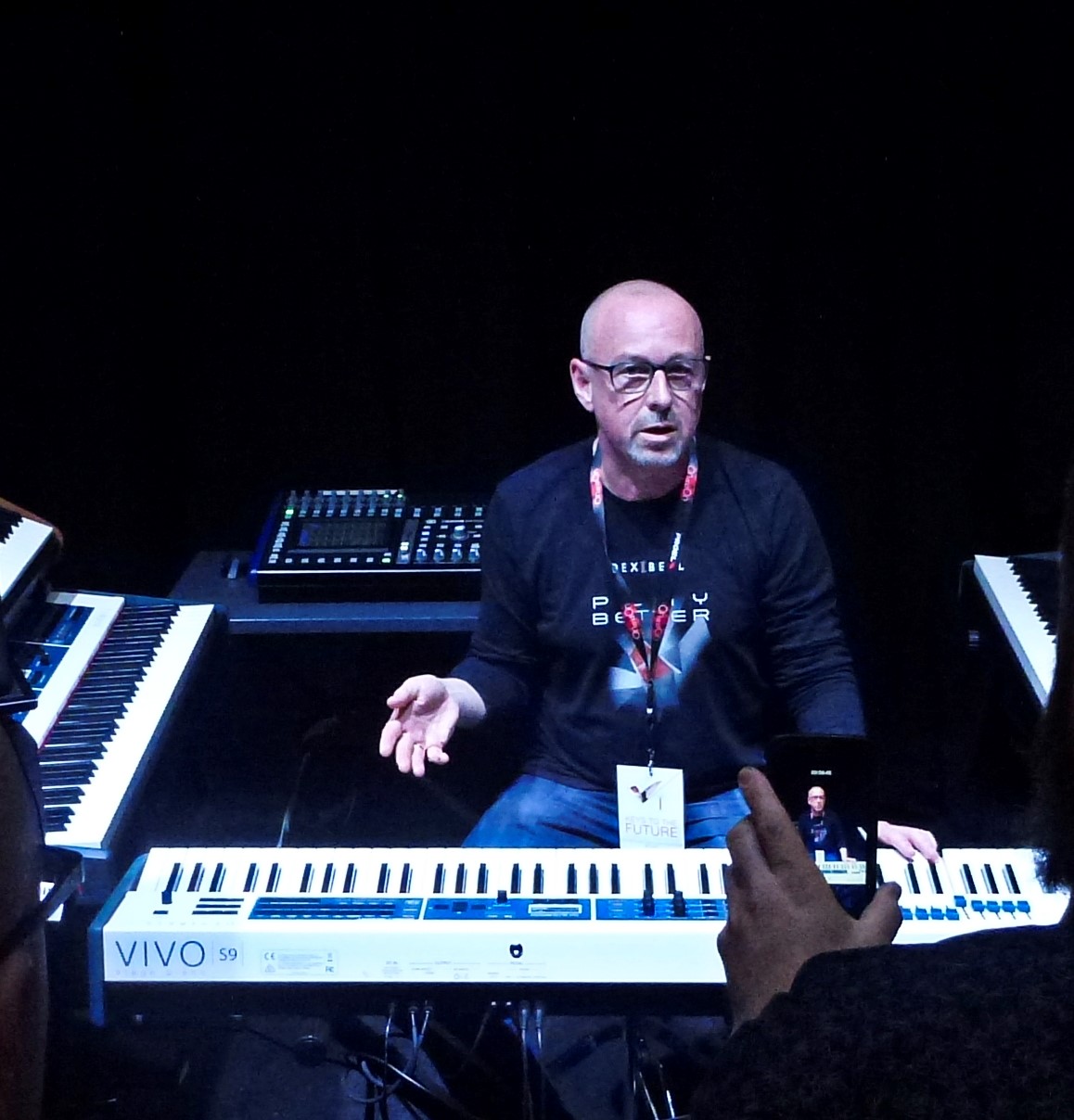 The showroom also provided a good forum for dealers to share their thoughts on how the new Proel lines might fit with the current mix of products in North America, as well as how particular products might be presented to make them stand out at their store showrooms. The group agreed that, like a new keyboard offering, studio monitors and microphones need features that will stand out in order to effectively compete in a market already dense with similar products.

Well-known Proel accessories were also available in the showroom for the dealers to inspect, including cables, stands, cases and Grassi brass instruments, along with Proel’s Axiom professional sound products and Sagitter professional lighting fixtures and control.

From the showroom, North American dealers and artists were introduced to drum designer Tullio Granatello, who guided them to the drum studio where Proel’s carefully crafted Tamburo drums were set up for demonstration. Granatello explained the evolution of Tamburo drums and unique design aspects of both wood joining and hardware design that have become key features of today’s Opera, Unika, T5 and Formula drum models.

Activities for the second day of the event centered on the 100-seat Proel Theater equipped with full stage lighting, as well as professional sound and video production capabilities. The plush seats filled for the morning session of Dexibell’s program as our North American dealer group was joined by European dealers and press. Following a warm welcome by Proel’s Fulvio Pesenti, presentations in both English and Italian recapped Dexibell’s history, current accomplishments and vision for the future. Dexibell’s founder, Luigi Bruti, spoke passionately about the need for Dexibell keyboards to represent the best in Italian innovation, engineering and design.

“We have a responsibility,” Bruti said, “to bring these unique products to the world.” Technical specifications and unique advantages provided by Dexibell’s T2L (True 2 Life) technology and forward-looking design were then presented by Bruti, including a projection of what the nextgeneration Vivo H10 will offer. “Dexibell’s style must not only be unique and recognizable,” Bruti maintained, “but also reflect the artistic and technical values of its origins here in Italy.” 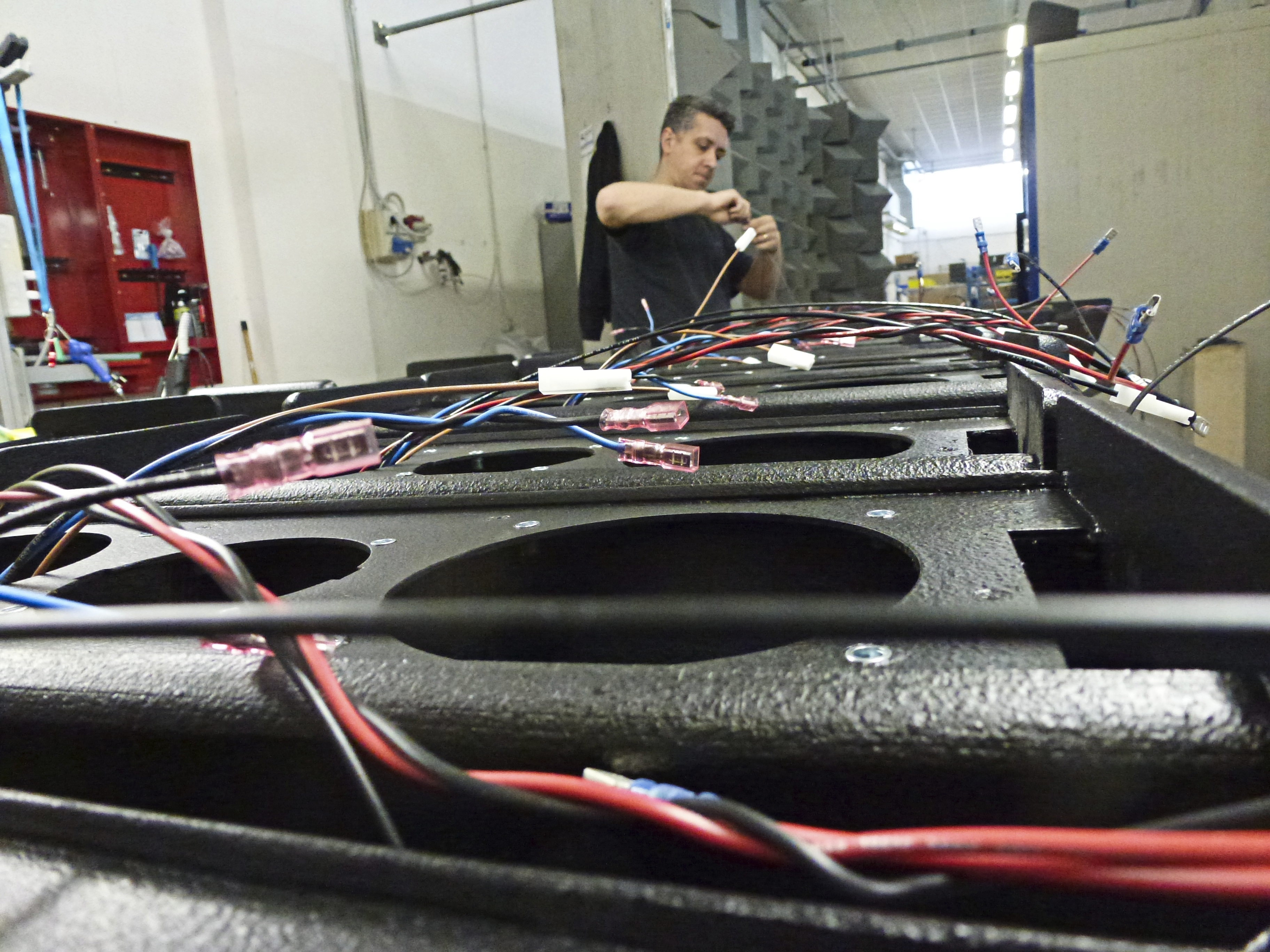 With that, Bruti called upon designer Lorenzo Naddei, CEO of Q-id, whose years of experience designing for Italian automotive style icons Ferrari and Maserati helped him in fashioning Dexibell’s striking H10 case design. It’s hard to imagine that there would be anyone better than Naddei to speak to the beauty and importance of Italian design. “This Dexibell piano design is not intended to be revolutionary,” he said, “but evolutionary. It is a design that says, ‘come play me.’”

The informative presentations by each of the North American retailers were followed by performances and informal breakout sessions by Dexibell artists Mauro Goia — playing the Classico L3 organ — and Ralf Schink, who expertly demonstrated performance features of the Vivo S7 and the new VIVO H10 console piano. Breakout sessions allowed for popular and competitive features to be expertly explained, but also provided valuable insights on features of particular interest to professional performers. 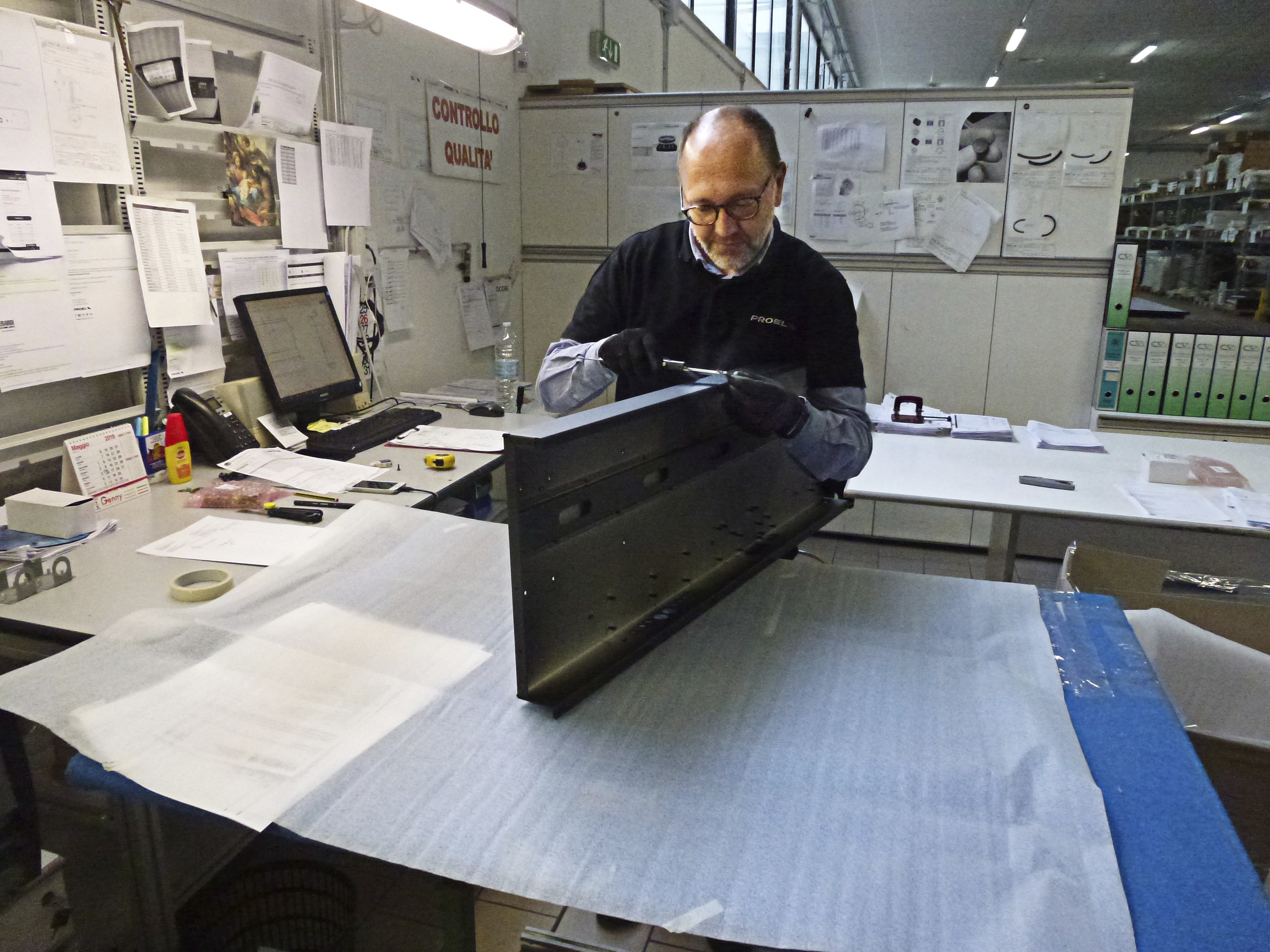 An Evening With American Stars

Following a cocktail-hour reception and buffet dinner of fresh regional fare and local wines served just outside the Proel Theater, evening festivities included addresses by Proel and Dexibell leadership and recognition of the Dexibell development team. Sweetwater Sound, Cosmo Music and Washington Music were called on stage to be recognized with plaques presented to each for their extraordinary work as key Dexibell partners in North America.

Ferranti shared the importance of the company’s activities in North America with the primarily European audience, including events at the 2017 NAMM Show that brought Dexibell the attention of music industry giants, like Stevie Wonder, and which continue to draw attention from both established and emerging American popular music artists. He expressed his appreciation for dealers and artists whose devotion and work with the brand has helped to establish Dexibell in North America. This offered a perfect segue with which to introduce American artists for the evening’s featured performance — Phyllisia Ross, Victoria Theodore (Beyonce and Stevie Wonder) and Dave Tweedie, CJ Emmons (vocalist on “Dancing with the Stars”) and Sheléa (Stevie Wonder, Quincy Jones) — who put on a fabulous show for an appreciative international audience. The evening was brought to a close with dancing in front of the stage and a standing ovation, which led to an impromptu encore that called all the artists and musicians back to the stage for a final song together before wishing the audience “buonanotte.”

Ferranti concluded he is clearly pleased and proud of Dexibell’s progress in North America and the company’s growing stable of American Dexibell artists. “We call the collection of our artists ‘la familia,’” he said. “That means family in Italian, and that is what we are. We are very grateful and fortunate to have such great dealers and artists endorsing our products.” 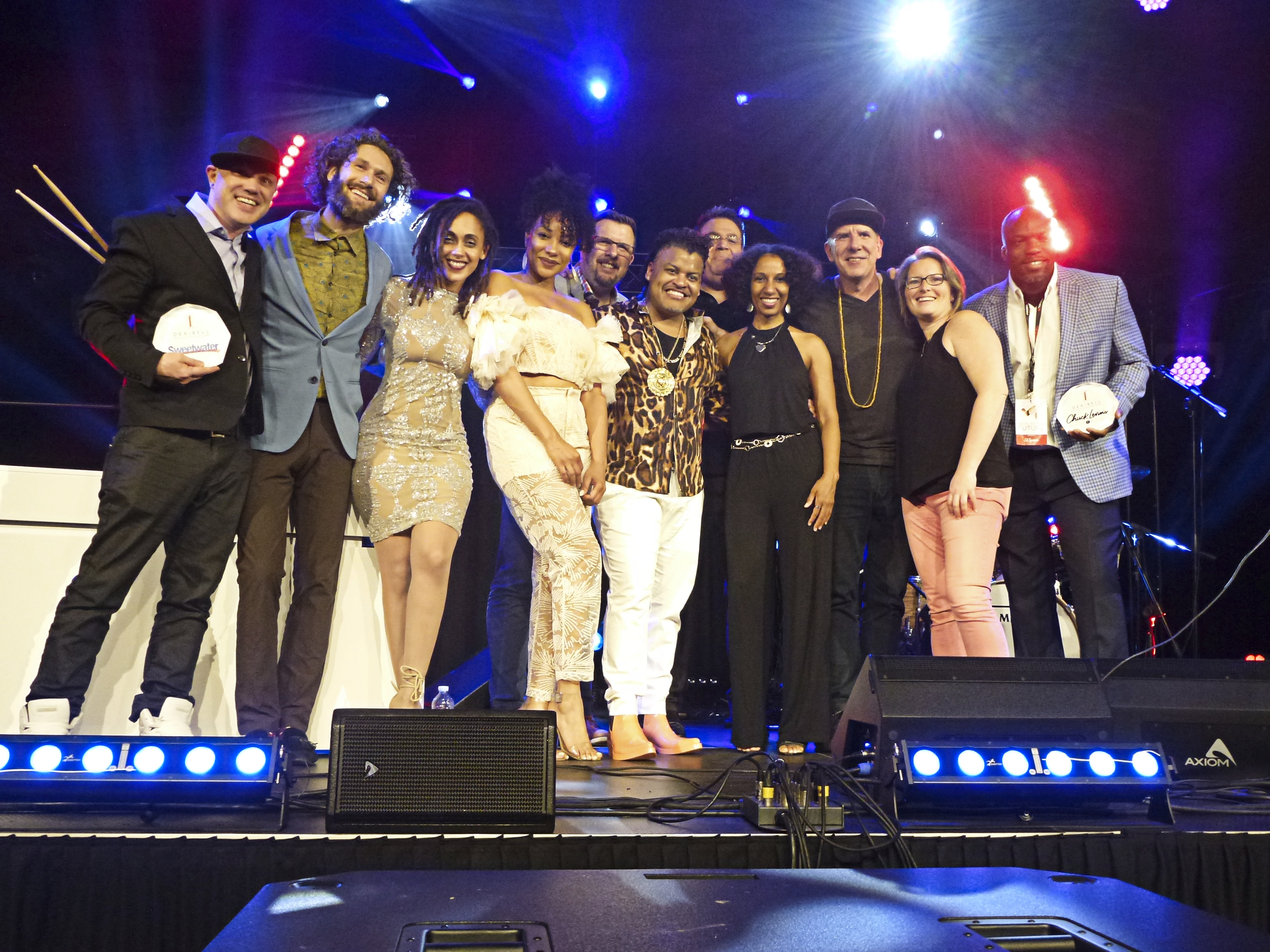 Dorothea Taylor and Questlove Live on 'The Tonight Show' on NBC